We’ve been doing plenty of cooking and baking recently, but I’ve been remiss in posting about any of it, mostly because we eat it too quickly to take photos. So this post will be sans photos.

-Pop-tarts from the Flour book by Joanne Chang (filled with apple-maple jam that Dad brought from a farm stand in Vermont, mmm)

-Purple Plum Torte from SmittenKitchen (who got it from The Essential New York Times Cookbook) – We used 6 regular smallish-medium plums instead of twelve Italian plums, otherwise we just followed the recipe. And it was INCREDIBLE.

-Butterscotch- and Chocolate Chip Cookies – from the Tollhouse recipe for chocolate chip cookies, but with the following changes: used 1 cup AP flour and 1 cup whole wheat flour instead of 2 1/4 cups AP flour; no nuts; replaced over half the chocolate chips with butterscotch chips. (It turns out I have hit that age where butterscotch is unpleasantly sweet. Fortunately we gave most of these away at a neighborhood gathering.)

I would like to state for the record that we have also been eating a lot of kale.

Now for the butternut squash casserole “recipe” (“recipe” in quotes because these amounts are not exact nor hard-and-fast):

Preheat the oven to 425 F. Prepare your squashes into bite-size pieces; toss with olive oil, salt, and pepper. (For the amounts stated above, we used one 9×13″ Pyrex dish and one 8×8″ Pyrex.) Roast the squashes for about 40 minutes, turning once or twice, until they can be easily pierced with a fork. While the squashes are roasting, slice the onions and saute them in a pan over medium heat with the butter (or olive oil, if you prefer). Once the onions have softened, splash a little balsamic vinegar into the pan, stir, and keep cooking over medium-low heat, about half an hour altogether. Have the grated cheese and fresh spinach ready.

As soon as you take the squash out of the oven, scatter the spinach over the top and mix them together. The spinach will wilt nicely. Add the onions and cheese and serve warm. 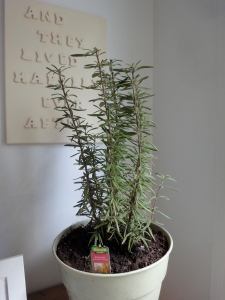 An exceedingly rainy June and a heat-wave-filled July weren’t particularly kind to my plants this year. (Also, I may have started much too early; a friend told me she never starts tomatoes until Memorial Day in May, and I did most of my planting mid-April.) So, my amateur gardening skills plus the less-than-ideal weather combined to create mixed results, but gardening isn’t all about the results – it’s also about the process. (This is different, I think, than saying “It’s not the destination, it’s the journey.” Unless you enjoy being cooped up in cars/buses/trains/planes and breathing everyone else’s recycled air, journeys really can be unpleasant sometimes, but moving dirt around with a spade is nice and meditative, and feels somewhat productive even if no strawberries come of it in the end.)

As Beth says to Jennifer in Rainbow Rowell’s excellent novel Attachments, “…The same reason Mitch tries to grow giant pumpkins every summer – even though your yard is too small, is infested with beetles and doesn’t get enough sun. Mitch doesn’t want the easy thing. He wants to work a little harder to get the thing he really wants.”

So, how did the plants fare?

Raspberry canes: Unequivocal failure. I did not soak the roots in water for an hour before planting, as it instructed on the package, and I didn’t buy new soil or fertilizer, just stuck them in the ground. These were mistakes. The canes never took root or grew at all.

Cherry tomatoes: Semi-success. One of the two plants drowned (I thought the pot it was in had a drainage hole, but it didn’t), and the other survived but only produced a very modest yield – probably one large handful over the course of the summer.

Strawberries: I repotted these from my too-small containers into 5-gallon buckets. Initially the buckets didn’t have drainage holes in the bottom, but we added them (with a hand-cranked drill) as the rain continued all through June. The plants themselves seemed to thrive, but hardly produced any berries. In fact, I think the only variety that did produce berries was the Ozark Beauty. 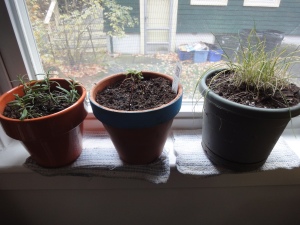 On the whole, the herbs were much more successful than the berries. The rosemary is healthiest ; a couple weeks ago, I took a few cuttings from the top and let them grow roots in a little jar of water. I planted those in soil today , so we’ll see if they take. The mint is, if not thick and vibrant, soldiering on; there was a pretty insane root system in there when I unearthed it today to transplant. The onion chives probably did least well – they could have used more attention throughout the summer – but I repotted them and pulled out as many of the dead pieces as I could (realizing afterward that I’ve now spent more time on chive-plant-grooming than on my own hair this month).

I also planted some basil from seed part of the way through the summer; I think it was as late as August. I probably should have spread the seeds among a few different pots, but I put them all in one, which was a little crowded. I know basil doesn’t usually grow well indoors, but it’s still alive, so I brought it in anyway, and we’ll see how it goes.

The African violets and succulents, which live inside year-round, are doing quite well. 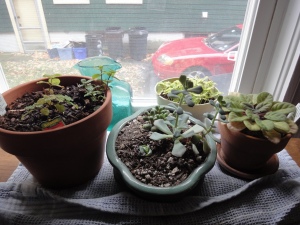 And for those of you who are wondering whether the dog has adjusted to the new furniture placement, the answer is no.

“I will curl up in a tiny ball and look all pathetic until you put the couch back.”