The miniature rose bush I pruned back to nearly nothing is doing extremely well indoors. 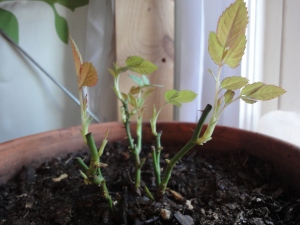 Once these blooms start to fade, I’ll cut it back again. Because that’s what you’re supposed to do, right? I really should read a gardening book one of these days. Any recommendations?

Aside from the rose bush, most of the other plants are still doing well indoors too (except one of the African violets seems to be dying, I’m not sure why), and I’ve added an orchid to the bunch. My track record with orchids is so-so; I know to drench them and then let them dry out completely before watering them again, and keep them out of direct sunlight (they actually do okay in offices). We’ll see how long I can keep this one alive.

One response to “Winter rose”