The blizzard hit pretty much as predicted in our area. This morning I went out the back door and waded through snow above my knees. We took Sudo out the front instead, so there was only a little deep snow before the street, which had been plowed at least once during the night or early morning. Coming back in, Ben was going to dig a little path through the snow banked between the street and the front steps, but Sudo had had enough of being outside, and tried to jump straight over the snowbank. She kind of got stranded on her belly, since the snow was taller than she was, but she paddled on through, ran up the stairs, and tried to push the front door open with her face. She’d be shocked to learn she’s the same species as a husky. 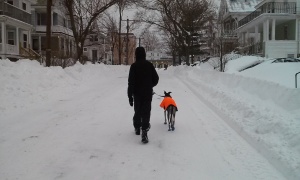 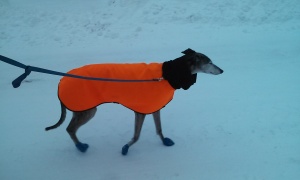 In this one you can see how she’s squinting her eyes against the snow and wind.

Inside, we’ve been well provisioned, having purposefully created leftovers for the past couple days in case the power went out (it hasn’t). Fresh baked bread, North African stew, pasta with homemade sauce, chocolate chip cookies, and lots of tea and hot cocoa. And that’s just the food! We also have stacks of books. I finished God’s Hotel by Victoria Sweet (thanks Erin!) and am trying to decide what to read next – The Art of Fielding? The first in Tamora Pierce’s Immortals series? Vanessa and Her Sister? Decisions, decisions. 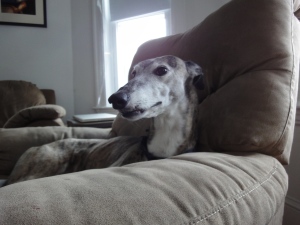 Back inside and ensconced in her armchair once again.

One response to “Snow days”